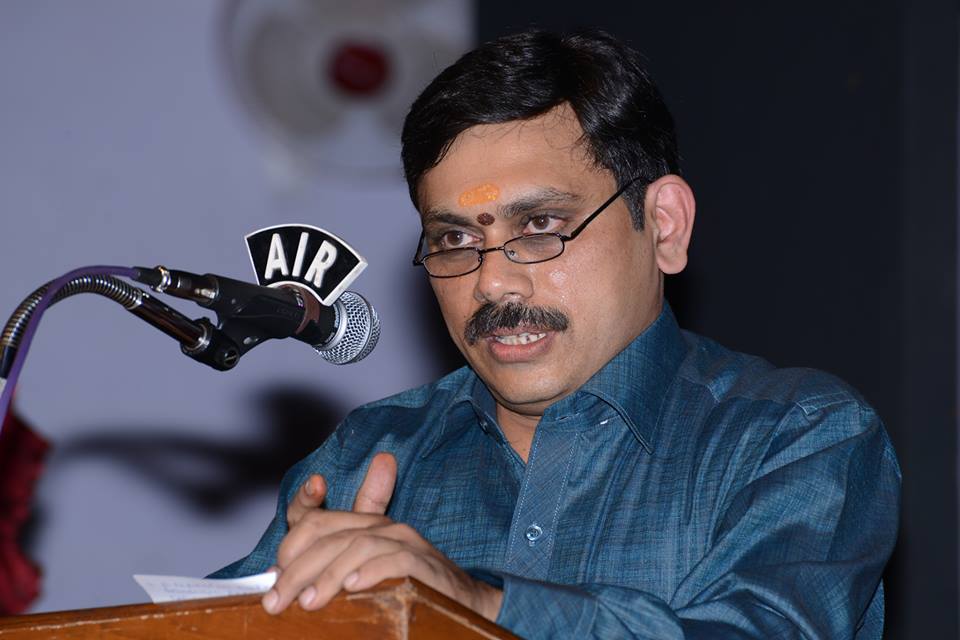 ‘Multifaceted’ is a word that we would have frequently heard in conversations. But often have I wondered, how do we define what is means to be multifaceted or who can be called so. Oxford dictionary gives the meaning as ‘Having many different aspects to be considered’. We tend to associate this term to people who try their hands, more as a hobby, in multiple fields. But rarely do we find personalities who truly are accomplished in different fields and who have done noteworthy work in all their multiple areas of interest.

One such personality, who justifies the word multifaceted is Dr N. Raghu. His works as a musician, composer, writer, researcher, speaker, trainer, author and an administrator surely serve as an inspiration to several young minds. Writing about his life and works is a pleasure for me both on a professional front as an artist and personal front as his nephew. Having quite literally grown up in his lap and having seen & been a part of his many works, I believe that I can best capture the essence and works of Dr Raghu, whose credentials are worthy of high appreciation and respect.

Dr N. Raghu was born on 30th March 1966, to Vid. Sri. S. Nanjundiah and Smt. Nagamma. Vid. Nanjundiah was a well-known Karnataka classical musician of yesteryears. Along with Vid. Ganesha Shastri, he formed one of the earliest male vocal duos of Karnataka. Besides that, he also worked as a Manager at State Bank of Mysore.

Raghu is the youngest of the 5 siblings and right from childhood showed great interest and aptitude towards music. The prodigious talent he had would soon come to light in the form of harmonium which he learnt to play without any formal training, just by watching his father. Even as a young kid he began providing harmonium accompaniment to his sisters in music concerts.

As a testimony to his talent, he was invited by Mr. Murthy of Gandharva orchestra, to play harmonium for his orchestra when Raghu was just about 11 years old. His skills as a light musician got further enhanced while in Vijaya High School, under the guidance of Smt M R Vidya. It was during the summer of 1979, at the age of 13, he attended a drama workshop conducted by Smt. Prema Karanth for the production of the drama ‘Alibaba Mattu Nalavattu Kallaru’. This started a long association with the amateur theatre group ‘Benaka’, founded by the well-known theatre personality Sri B.V. Karanth. Here he picked up the nuances of theatre music of Karanth’s style. This also helped by adding to his musical thought both as a performer and as a composer. He took active participation in famous plays like ‘Jokumaraswamy’, ‘Rishyashrunga’, ‘Naayi Kathe’, ‘Nakkala Rajakumari’, ‘Kaage Kunitha’ etc. While in his college, he came in contact with AIR Bangalore through the children’s program. Smt. K.S. NirmalaDevi, producer of Children Programs recognized his abilities to write and compose musical productions and encouraged him with several opportunities. His first independent production for AIR was a ballet titled ‘EE Bhumi Ellarigaagi’. This was followed by serial dramas ‘Panchatantra’ and ‘Kuduremukhadallina Saahasagalu’.

It was during this time that he was invited to produce live music for a National Radio play titled ‘Mahavishwa’ directed by H.V. Ramachandra Rao. Following this he wrote a radio play called ‘Dweepa’ which was awarded the First place in the All India Radio Playwrights competition. At the age of 22, he got graded as a light music composer from All India Radio, Banglore. Raghu went on to specialize in Kannada light music which saw him producing several musical productions for AIR. He composed music for stalwarts like Dr Shimogga Subbanna, Vid.S.Shankar, Ratnamala Prakash, Malathi Sharma, Kasturi Shankar, Nagara Srinivasa Udupa, Majula Gururaj, Shankar Shanbhag and others.

On academic front Raghu secured his bachelor’s degree in Electrical Engineering from UVCE, Bangalore University, and had a brief stint as an engineer for about 4 years in various companies.

In 1993, he joined All India Radio, Hassan as a Program Executive, which marked the beginning of a long administrative and creative career. Working at AIR Hassan, he was responsible for constituting a local music audition committee due to which many local talents got an opportunity to get graded from the AIR. He contributed immensely to all formats of broadcasting, especially music and drama, by building a strong team of local artists. Several musical productions like ‘Vaadya Bharathi’, ‘Daasavarenyara Daarigunta’, ‘Bedaradiru Bharata’, ‘Sourayana’. ‘K.V. Iyer’s Naataka Saptaaha’, ‘Haasana Kavi Darshana’ etc. and many invited audience programs saw light.

He received the prestigious Central Junior Research Fellowship from the Department of Culture, Government of India, for his research thesis, later published as a book titled ‘Rasamsha: A New hypothesis in Indian Music’ which had a mentoring and an appreciative foreword by Mahamahopadhyaya Dr R. Sathyanarayana.

After his transfer to Banglore in 2002, his activities continued with the same zeal and enthusiasm. He led FM Rainbow (101.3MHz) as a successful program manager, building the brand ‘Kannada Kaamanabillu’ besides improving the revenues of the channel considerably.

His interest in musicological research resulted in the dissertation work titled ‘Sangeeta Shaili Shastra’ (Musical Stylistics), the first paper of its kind in Indian Music submitted to Kannada University, Hampi, earning him a D.Litt in 2006.

In 2008, he was assigned the task of remodeling ‘Amrutavarshini 100.1FM’, the first ever exclusive classical music channel of All India Radio. As a part of this exercise, he conceptualized various programs which remain popular till date. ‘Amrutha Gurukala’ – Music lessons, ‘Amrutha Kalasha’ – Musicological research-oriented feature series, ‘Amrutha Mahal’ – Concert series, are some of the very popular programs. The unique and highly popular signature tune of Amrutavarshini, was composed and produced by him using only computer synthesized instruments.

From 2008 to 2010 he worked as the Program Head at AIR Gulbarga. During this tenure he reactivated music section and improved the revenues by introducing many innovative in-house program activities.

In 2009, he secured 1st Prize in All India Radio Annual Award competition for producing the radio play ‘Kharevandra Thappu’. He also presented a paper on Kannada Light music at the All India Kannada Literary meet held at Gadag.

Dr. Raghu directing of the recording of a play at All India Radio

In 2016, he led the conceptualization and production team of ‘RAGAM 24×7’, India’s ﬁrst ever Classical Music Channel which is available on mobile app, DTH and web streaming modes. This earned him much appreciation from connoisseurs. He continues to supervise this channel till date.

In 2019, on the occasion of public service broadcasting day, the Indian Broadcasters Forum Chennai, awarded the ‘Akashavani Excellence Award’, in appreciation of the services rendered for the cause of Public Service Broadcasting.

Some of his other contributions

Currently Dr Raghu works as an Assistant Director – Programs in AIR, Bangalore. Out of passion, he teaches light music online for a select group of students. As a family man, Dr Raghu leads a happy, contented life with his wife Smt. Veena Raghu and daughter Srimedha Sathavalli, pursuing creative activities in all fields of interests.