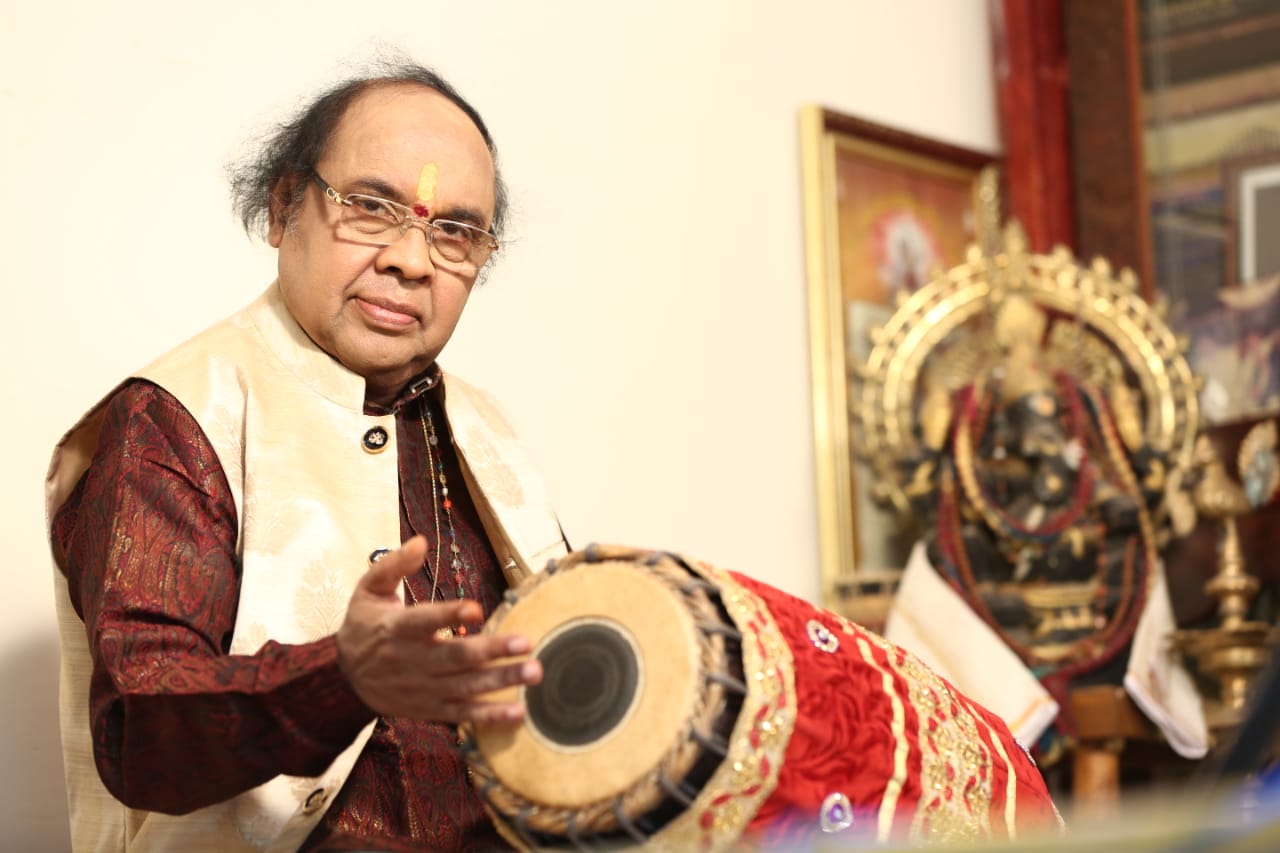 Esteemed Carnatic organizations and Sabhas recognizing and honouring a Mridangam artiste is indeed rare and commendable.

With over 67 years of concert performance behind him, Mridangam Maestro, Padmasri Dr. Yella Venkateswara Rao’s exuberance is still as high as it was when he started playing at age of seven. He is the fifth-generation musician in his family. His father was a violinist and student of music-icon Dwaram Venkataswamy Naidu, uncle was Yella Somanna Rao and forefathers too were trained in Carnatic music.  Today, Carnatic musician Yella Venkateswara Rao has come a very long way — he is considered a legendary percussionist, a Mridangam maestro with over 28,000 performances to his credit, and a list of awards and honours – including the recent Lifetime Achievement Award and many accomplished students all over the world.

Speaking on his contributions as a Mridangam artiste, YVR mentions Palghat Mani Iyer and Palani Subramanya Pillai as his idols. Even though he is from PMI baani and it is noted in his playing however, YVR displayed his uniqueness in each performance. He wanted to popularize the Nadam aspects and importance of Mridangam as a Solo concert in India and abroad.

Young YVR receiving award in 1961 from then President of India, Dr. Sarvepalli Radhakrishnan.

He adds, “Accompaniment in its true sense is a challenge. A Mridangist has to blend his playing to the main artiste who might belong to different Baanis and each concert has to be elevated and uplifted by different styles of playing and adaptation”.

He was also among the few who used to accompany women artists at a time when many were reluctant to do so. Vidushis like T.Brinda, Radha Jayalakshmi, M.S.Subbulakshmi, D.K.Pattamal, ML Vasantkumari, Srirangam Gopalaratnam were among few who YVR accompanied frequently. The demand for his accompaniment came at a time when there were other well-known contemporary Mridangam artistes in Carnatic Music.

YVR’s playing and creativity is a testament to Mridangam playing. The balancing of his playing and strokes reveal his Sadhanam. His playing involved audiences and artistes alike, to be in a state of awe and reverence of the creative manifestations he brought about. YVR therefore, was and is highly respected, to be a rare Gem for innovating on stage.

He was also one of the first Mridangam artistes to start providing solo concerts, and also composing and directing Musical features, ‘Talavadya kutcheris’ etc. on Radio and TV, which has won National and International awards.

He has played for many jugalbandis with Hindustani artistes and has performed in many well-known music festivals in India and abroad with Pandit Hariprasad Chaurasia, V.G.Jog, Pandit Ravishankar, Pandit Jasraj, and legendary Tabla artistes like Ustad Allah Rakha, Ustad Zakir Hussain, Ustad Kishan Maharaj, Ustad Shaik Dawood Khan, Shafaat Ahmed Khan and others.

“I always wanted to be recognized uniquely in the Carnatic Music field and my Sadhana proves it. When I started giving solo performances, I used to begin traditionally and later improvise based on audiences’ responses. Every concert experience was my guru! I learnt something every time I performed, especially with great artistes and also with upcoming ones,”

Indeed, he has given a great deal to the world of classical-music. He has to his credit hundreds of lec-dems and workshops on topics like laya-vinyasam, aesthetics of sounds, mathematics of Mridangam and tani-avaratanam. His name is part of the Guinness Book of World Records forplaying Mridangam non-stop for 36-hours. His handling of the Eda(left), Gumki is a trademark in itself. The muktayas he can play with his left has artistes and audiences spellbound.

YVR has been part of many musical confluences of classical, jazz, fusion genres and has extensively travelled around the world.

“The goal shouldn’t be to just accompany the main artistes. Whatever learning one has, the percussionists must become the main artiste. That is when true blending can happen for creative output. Focus has to be in elevating the concert, support the main artiste, and not to dominate. Many Mridangists today have the same way of accompaniment for all artistes, whether they are Vocalists, Flautists, Veena or Violin artistes.

They have to understand that each instrument has different techniques to accompany. For example, while accompanying Veena, one has to listen, play soft strokes and Nadam has to be uplifting. One should know where to play softly and where to play monstrous strokes. The Kriti might be same but accompaniment has to be different. Adaptation and evolution is integral to betterment.”

Amongst many disciples YVR has trained, Vid. T.R.Sundaresan from Chennai, Vid.N.Vasudeva from Bangalore, Vid. Jayabhaskar from Hyderabad are amongst few popular & accomplished Vidwans.

“When I moved to Andhra for my Gurukula vaasa, I had strong conviction to learn from the Maestro, whom I dearly admired. Yella Sir had worked on the craft for so many years seeking inspiration from legends like PMI and PSP – his variety of strokes, Ghumki, Fern modulations, Korvai combinations were just extraordinary!”

TRS adds, “The way he used to play for RTP, left modulation, Ghumki matching with the right strokes, it was a perfect balance and surely the best in the world for the listener. His view was not restricted to a small framework; he always brought something new to the concert for any Tala – even today! Nobody can play like YVR, only he can play his way and such is the grandeur of his accomplishment.

He became the Mridangam and Mridangam became him. That was Yella Sir’s playing. Whether it’s a solo concert of 1 hour or 3 hours, he used to keep audience wanting more and they were in his grip! I can say YVR literally sang with his instrument. His accompaniment to a vocal artist was different from how he plays for a Veena artist. No one else could bring in that ability.

Take for example: Veena S. Balachander, he was a great artist – he always wanted very soft playing from accompanists. However, with Yella Sir, he used to enjoy so much and has never asked YVR to play according to his needs. Such was Yella Sir’s ability. In one of the concerts of Mandolin Srinivas in Mylapore Fine Arts few decades back, for a Kriti he was playing, Yella Sir played a small sarva laghu phrase and immediately Mandolin Srinivas put down his Mandolin, asked Yella Sir to continue playing. Srinivas was spellbound by the melody and brilliance of the phrase and it was such a beautiful experience for artistes on stage and the audience. I was lucky to witness such an event.

Each concert experience of YVR had combination of subdued strokes, relevant mel kaalams, in no concert he would dominate at all – it always used to be elevation only.  I feel proud that I was able to learn from Yella Sir. He will always be my Guru and I consider myself blessed to have learned from him.”

Vidwan N. Vasudeva recalls his experiences of learning from the Maestro as enthralling and magical. “I used to listen to Yella Sir’s playing in AIR and was inspired by his tonal quality, speed, clarity of strokes and accompanying techniques. His playing resonated the main artists’ rendering of the Raga and Shruti perfectly, each Kriti would be elevated to a divine experience. YVR always had something new and different for each concert. No one could anticipate his playing as it is always dynamic and rooted in Nadam.

The nuances of the Tala, tonal ability – it was just not a traditional Tani avartanam. There will always be multiple ideas arising in his mind and how he played them is what a percussionist needs to learn. It is not easy to play all the ideas – to transfer them to playing is no easy task. However, Yella Sir has proved time and again that he can play anything. Such is his expertise.

My playing evolved extensively from his emphasis on Nadam and aesthetic blending to the main artiste. His stage presence was a guaranteed success for the concert. Such was his elevating contribution. One may also note that audiences for his concert used to have many artistes as well, because it was a learning experience for all.

Though he has many accolades, he is very simple and down to earth person and has deep Bhakti and reverence to the Carnatic Musical Trinities. To cite an example, he used to accompany with Mridangam for Unchavritti at Thiruvaiyaru Thyaga Brahma festival. Currently, he has approached Central government for necessary support for all kinds of artistes during this pandemic.

YVR firmly believes in always contributing something new for present and future generations of musicians and is an inspiration for all percussion and music enthusiasts.”

To conclude, as a student of his Bani and listening to his playing over the years, we can deduce his research & contribution to Mridangam as legendary. He will always be my inspiration and as he energetically says, “Carnatic Music is divine incarnation. It’s a blessing to learn, practice, perform & propagate the eternal knowledge endowed to Mankind”.

Very insightful.. Beautiful scripting of your devotion and dedication towards music and legends of Mridangam. Great work Aniruddha.