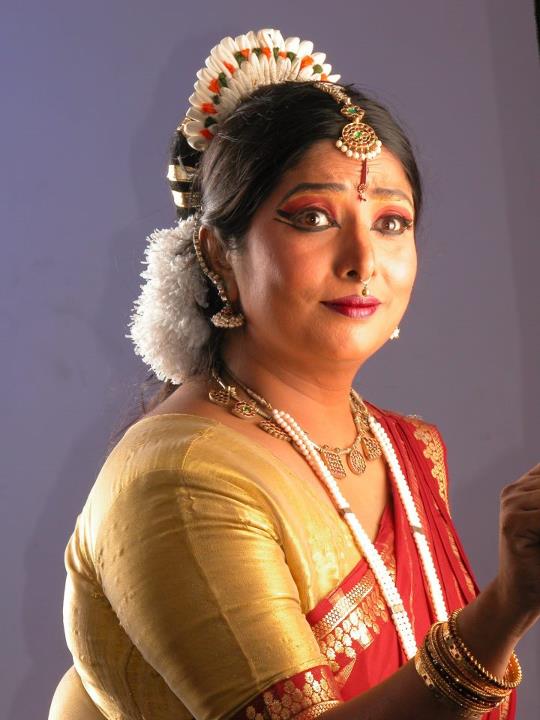 There is a saying in Kuchipudi “Adi nata, antya Surata”, the dance drama begins in nata and concludes in surata ragas. This is a regular format of music in Kuchipudi.

Though the tradition of carnatic music is one and the same through out southern part of India, there are some significant and peculiar and characteristic regional variations cultivated and developed by the people of the different regions, which has made musicians specialize in these styles of singing. The “Daru”. Is an old musical form, having the musical sections – pallavi, Anu pallavi and charana. The main mood or theme is sringaara or love. The” Patra pravesha Daru “ (The character entry in Dance Dram) for example Hiranya Kashyapu entry in Prahalada charitha Opera is rendered in a powerful manner, here the Daru starts with a prelude of Ethu jathi(Beginning jathi)or conical notes recited musically in medium and quick tempos and then the Daru is sung. Daru is the main content of the music in Kuchipudi; it adapts Jaru style of singing in – medium and quick tempos. The usage of pure notes and phrases in quick tempo is the characteristic feature of the kuchipudi music. The kandarthamulu (a verse rendered musically by the character in a dance drama) and seesarthamulu,( which are rendered in verses in the beginning but sung to a rhythm at the end,) are peculiar to Andhra region. They are called seesartha , kandartha durus. Ahiri is most popular raga in the Kuchipudi style Operas. This is just one uniqueness to mention in rendering the music to kuchipudi style of dance one needs to make a proper study of this style of music for a correct and apt rendering and appreciating this peculiar style. The rhythmic structure of these Darus resembles the Kritis and some of them are composed in different speeds and gathis. The famous and most popular “Madhana Daru” in Anandha bhiravi composed in Vilamba Kaala and Adi Taala in the Opera Sidhendra Maha Yogi’s Krishna parijatham Bhama kalapam is a typical example of a Daru, The sections of which are sung in different ragas and different tempos .The Pallavi is composed in vilamba kala in Ananda Bhairavai and towards the end of it the sahitya becomes conspicuous in madyamama and dhruta kalas. It consists of the words maguva, lalana, cheliya, sakhiya and these words are sung in al the three speeds which particular feature add color to the rhythmic and dance structure of the song.

They are also sung in different variations of rhythms like, tisra, chaturasra, Misra etc., the anu – pallavi is rendered in nata bhairavi and concludes in the raga madhyamavathi with the words “Ne Thala Lena O Yamma” (I cant bear the pangs of separation) in quick rhythmic tempo.

The ragas employed in these Darus contain the “Prayogas” (the nuances of the raga) specially peculiar and characteristic of the Andhra region. Pure notes are generally employed and phrases are rendered in quick tempo. Prayogas like PA DA NI SA in Mukari and GA MA PA – MA PA NI – PA NI SA NI PA MA in Ananda Bhairavi without gamaka are unique to the style of music. Ahiri is sung with kakali nishada and chatu sruti dhaivata prayogas and create an impression that it is derived from surya kantha mela.

The music that is prominent in the operas of Kuchipudi apart from Darus are Shabdams. Shabdams are smaller dances included in the big operas bringing out the stories from the bhagavatha and ramayana; they are same as the sabdam of Bharatanatyam style. It is normally a composition with the words interspersed with jatis of mrudangam sung in medium and quick tempos. The dasa avatara sabdam and Krishna sabdam, both composed in raga mohana and manduka sabdam in kambhoji are quite popular. They are generally composed in the Adi, rupaka, jhampa and triputa taalas. The most well known are the Ramayana shabdam, ulupi shabdam. The rhythm changes are very peculiar in rendering these shabdhams as they change from chathurashra (4beats) to Mishra (7 beats) to make the compositions very dramatic. In order to make a better impact sometimes the tempo is increased without any relation to the original tempo that began in the song. The main ragas are mohana, Ananda Bhiravi, Mukhari, DevaGandhari, Yadukula kambhoji, madhyamavathy, Nata, suruti. Some rare ragas are also used like kuranji, Ahiri, Saindhavi, Navaroju and Sokavarali.

One more important aspect of Kuchipudi is the “Tharangam” which form a part of dance drama, though not connected with the theme of the play. They are rendered with mnemonics (to mix and match lyrics) and a cluster of syllables which are suited to dance, which are often found at the end of the tharangam. ‘Tharangam ‘the pot and plate dance, as its popularly known today is the ‘de rigour’ in a solo performance. The ragas are interchanged and the rhythm patterns change as ‘gathi Bedas’, and dancers indulge in repartees with the percussionists.

During the past 3 decades gurus like Dr Korada Narasimha rao and Dr Vempati Chinna satyam have introduced Hindustani ragas in dance dramas like Hara Vilasam and other operas. With solo performances slowly emerging and replacing the long dance dramas in Kuchipudi, nritta numbers like the jathiswaram, thillanas and the Hindi bajans, vachanas and compositions of poets and saints brought in a new dimension to Kuchipudi music. The earliest known introduction of other language songs is Song, Gopala Karuna Kyu- nahi Ayae,” sung by the late ustad Abdul karim Khan, Available on the gramophone record in 1950’s.

Apart from this the Compositions that are generally prevalent in Kuchipudi are the poetic pieces, sung as musical compositions like the asthapadis, tharangams, javalis and padams of kshetragna, which were a part of dance dramas at relevant intervals, have been taken and designed to suit the solo performances today. With these unique characteristics in the musical content while adhering to the strictly to the tradition of Carnatic music has been popular in Kuchipudi operas and have come to be appreciated all over India. This oldest type of music tradition was eclipsed under many stresses and strains… nevertheless this music and dance has stood the test of time and today it occupies a special place as one of the richest and most ancient dance tradition of our country.

Hailing from Karnataka, the music for kannada devaranama has been adapted by me to the tarangam format. The vachanas of the shiva saints like Allama Prabhu, Basavanna, Akkamahadevi has been adapted to Kuchipudi daruvu format retaining the bhavageethe style of music. In my research of Karnataka yakshagana and Kuchipudi Yakshagana , I have adapted the ragas and jathis of Yakshagaana to Kuchipudi style in my production.