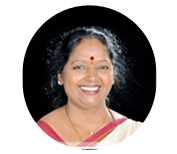 A person who has dedicated nearly 50 years of life to education and betterment of society can by no means be anything ordinary.  My first meeting with this extraordinary person, Dr. Geetha Ramanujam, (at that time Geetha Janardhan, as a maiden) was in the year 1975 in National College, Jayanagar, Bangalore where I joined for my Pre University course and she joined as a lecturer to teach us Logic.  During her 1st class itself she won our hearts.  Our plan to tease the wits out of the new lecturer and boycott the class was aborted by her spell binding lecturer.  She was a disciplined teacher but a warm, friendly, empathetic person, who was always ready to listen to our problems, personal or otherwise and tried her best to help us sort it out. Her personality as a teacher, mentor, friend, philosopher and guide had a strong impact on me.

I was fortunate to re-connect with her after more than 3 decades.  By then she had grown into a great personality with her enormous contribution to various fields, particularly education and theatre.

Dr.  Geetha Ramanujam, a distinguished academician, Philanthropist and an Educationist par excellence, aspired for wisdom right from her childhood which stands as a testimony for her choice of  Philosophy as subject to specialise in.  She has dedicated her life to teaching about which she is most passionate.

She was born on 17th December 1949, in Mysore, a city known for its rich heritage, history and culture, to Sri. T.D. Janardhan, and Smt. Vishalakshiambal.  She was born into a conservative lower middle class family, with 3 younger sisters and an elder brother.  As the eldest daughter of the family she had her share of responsibilities, which was much too huge to handle for a young girl of that age.  She would meticulously handle all the household work from cooking, cleaning and washing to tending to her younger siblings!  At the end of the day she was left with very little time to study.  Yet she never gave up the struggle to perform well in school.

Her schooling was done at Nirmala Convent, Graduation in Maharani’s College and Post Graduation at Manasa Gangotri, all at Mysore.  Later additions to her degree were M.A. in English from Bangalore University (external) and Ph, D in Philosophy with the thesis on Ahimsa and Environmental Awareness in Jainism, from Mysore University for which she was awarded   Gold Medal. It is interesting to note that basically she had taken up Zoology at the post graduate level.  But her close association with the Ramakrishna Mission and Sri S.S. Raghavachar, a professor and philosopher influenced her to change from Zoology to Philosophy, knowing her spiritual bent of mind and her aspiration for understanding philosophy and gaining wisdom. That was a bold step.

She started her teaching career at the age 20, to teach in a rural college, at Holenarasipur, Hassan Dist. much against her parents will.  Her passion was to teach and particularly to educate the rural folk who were deprived of any formal education.  She relinquished the opportunity to teach at a college in Mysore and later also refused a well paying Bank Officer’s Job. Her single point agenda was serving the society in a meaningful way.  But for the insistence of Dr. H. Narasimhiah, former Vice Chancellor of Bangalore University, and founder of National Education Society, she would not have accepted her post at National College.  Thanks to Dr.H.N. Otherwise what a loss would it have been for us here!  When she announced about her marriage, we were sad thinking that she might quit her job. She married Dr. P. Ramanujam, doctorate in Pharmaceutical Sciences and PG Diploma in Business Management, who is most understanding and supportive of all her activities and proud of her achievements.

She took her passion of teaching to a higher level, targeting the rural youth who are deprived of quality education. To that effect, after a long tenure at the prestigious National College in Bangalore, she started an educational institution under the name Geetha Ramanujam Educational Institution (GREI) in a remote area, to help the rural students. By her sheer dedication, determination and commitment, as her usual focus, she has turned the non-performing students to successful performers. When I met her at National College it was heartening to see her as the Principal of PU section of the college.  She had built up a great reputation amongst the students and the management with her invaluable contribution to the field of education and culture.

Her dream of taking education to the rural youth, which was lying dormant, was coming alive, despite this being a Herculean task. Raising funds was a major problem.  But Dr. Geetha Ramanujam will never lose heart.  She follows principles of Bhagavad-gita and teachings of Swami Vivekananda.  She raised funds selling all her property and pouring all her earnings to this mega project which has given her the satisfaction of educating hundreds of students and moulding them into successful, responsible citizens. This noble service to education is rewarded with Kannada Rajyotsava award.

Throughout this struggle she never forgets to mention the support she received from her family.She aspired to prepare the present generation to be more speculative and competitive to take up the challenges of life in becoming independent and successful citizens for whom she used theatre and other forms of art.  Her acumen as a playwright enabled her to transcend the essence of our value based cultural education.

For this effort she has won several awards, note worthy being, State Natak Academy Award, recognition as a playwright and Direction, for promoting social plays, educative and children theatre, etc. This perhaps was her best contribution to the society. Her messages to the youth in particular and the society in general through directing  her own plays, and those of other great playwrights have gone a long way in inculcating the right values in young and adult alike. What she initially started as a hobby, with her involvement in the theatre, has brought her laurels for her active engagement and great achievements in the field. She has written plays for schools and colleges and for rural folk with prevailing social issues and problems.

Her musical drama “Dasa Purandara”, having raving reviews, as the General Secretary of a cultural organisation I approached her to stage that performance during our Annual Cultural Festival.  That was a magnificent performance magnaopas production and received great appreciation and accolades.

The other musical operas written and directed by her are- ‘Nadajyothi Muthuswamy Dikshitar,‘Madhwacharya’s Philosophy’, ‘Devinadopasaka Shamasastri’ and ‘Ramabhaktha Thyagaraja’. These are an outcome of her deep research in the subject.  She was awarded “Artist of the Year” by Bangalore Gayana Samaja for this body of work.

She has definite views on the role of a woman in the family which she has highlighted in many of her plays and never admits of any kind of freedom of woman overlooking the family welfare.

Her multifaceted personality has drawn invitations from institutions all over the country and abroad alike.  Singapore Kannada Sangha – to give lectures on theatre, London Bharateeya Vidya Bhavana to deliver lectures on culture, music and Heritage, the North-West University of California to present paper on Buddhism and Science.

She writes regularly in several popular kannada and English dailies and journals, under the ‘Spirituality and Life’ column. She is a resource personality for all programs on Environment, Women, Education, Spirituality, Philosophy and Youth and Values of the Society on various TV channels.

When I ask her how strength and potential for these varied activities come from, she laughs saying, “There are no limitations to the mind, except those we acknowledge”!  Her courage of conviction has taken her a long way in achieving so much within a short span of time.  At every stage she has encountered lot of hardships like opposition from family, from villagers when she taught in rural areas, from her colleagues who disapproved of recognition she was getting and her versatility being recognised and rewarded.  Yet she was committed to what she chose to do.  There cannot be one more person like Geetha Ramanujam, with so much of dedication, determination and great achievement, yet humble and simple and always approachable to everyone.

She is a role model, an inspiration and guide to all who want to achieve and be successful, in particular students and women in this highly competitive, society.

Among the innumerable awards  she earned, A few of her prestigious awards are: Vidya Dharini – Contribution to Education, DVG award – literary contribution, India-UNESCO recognition for education through theatre, GARGI Prashasti. Panchajanja award-for promoting spiritual values in the society.Woman of Substance by Rotary, Bangalore.

Creative Cruise-The journey of a polymath